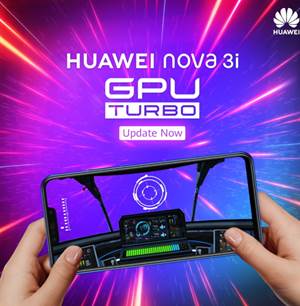 Kuala Lumpur, 14 August 2018 – HUAWEI, today announced the GPU Turbo update is made available for all HUAWEI nova 3i users. GPU Turbo is a graphics processing technology built from the ground up, that can revamp the ability of smartphones to process graphics-intensive applications like games. GPU Turbo will also allow users to enjoy much-improved gaming performances without having to upgrade their devices.

The industry is faced with a challenge whereby GPUs are unable to keep up with the demand of more graphically-intensive applications, such as gaming and VR. HUAWEI’s approach to re-architect how graphics are processed at the system level is a novel method, representing the company’s commitment to innovation and supporting its devices for an extended period of time post-launch. HUAWEI engineers took design cues from a car’s turbocharger, which uses a cylinder to feed extra air into the combustion engine to give a vehicle an extra boost of power at no additional fuel cost. The same concept was applied to GPU Turbo, which takes its namesake from the turbochargers of automobiles.

“Smartphone gamers nowadays are getting more demanding as they would like to enjoy more beautiful, sophisticated and smooth graphic gaming experience. GPU Turbo makes high-graphic gaming experiences possible while also unlocking the potential for other demanding applications such as AR or VR technology for shopping, learning and fun,” said Matthew Ng, Deputy Country Director, HUAWEI Malaysia.

Aside from mobile gaming, GPU Turbo will deliver an optimized EMUI experience for HUAWEI devices. The performance boost will also benefit nascent technologies such as AR and VR, opening up boundless opportunities including for virtual classroom, online shopping, telemedicine and more. For instance, through AR and VR, users can take a tour of a location through their smartphones, as though they were actually there in-person. The GPU Turbo gives the hardware a helping hand to ensure these graphically taxing applications run as smoothly as possible.

More rewards for Rules of Survival

For the gaming-loving troop, HUAWEI is collaborating with Rules of Survival where gamers will receive a Nova gift bag worth $50 USD when they log in to Rules of Survival with the HUAWEI nova 3i. This promotion commenced end of July and is limited to one nova gift bag for one device only. Exclusive for APAC server only.